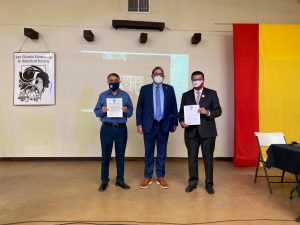 San Elizario, TX signed Sister City Partnerships with Ciudad Juárez, MX and Valle de Allende, MX this past week as a part of their 2020 Camino Real Binational History Conference held in San Elizario, TX. It as held from September 11-13, 2020.

The goals stated in their Memorandum of Understanding Agreement were that all cities seek to enrich cultural understanding, create adult and student exchange opportunities, and broaden cooperation to encourage goodwill between the cities. They also stated that a goal was to support the preservation and promotion of the Camino Real de Tierra Adentro through official and non-governmental exchanges, and friendship through the promotion of peace, stability, and prosperity in the region and the world.

This translates to: “This day, the mayors of Ciudad Juárez, Armando Cabada, and the city of San Elizario, Antonio Araujo, met to establish the two localities as sister cities that support each other. During the ceremony the two representatives signed the twinning agreement that will allow both to work on various programs.” 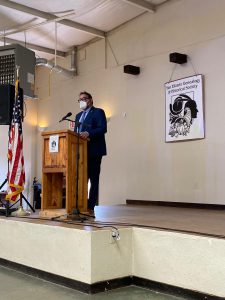 Peter Svarzbein, SCI Vice Chair and Board Member, was there during the signing to facilitate the partnerhsip.