A local newspaper from New Brunswick, New Jersey, called “TAPinto New Brunswick”, wrote an article about the Young Artists and Authors Showcase winner, amongst other artworks that are on display. Read below the text from the article or go directly to the article with this link. 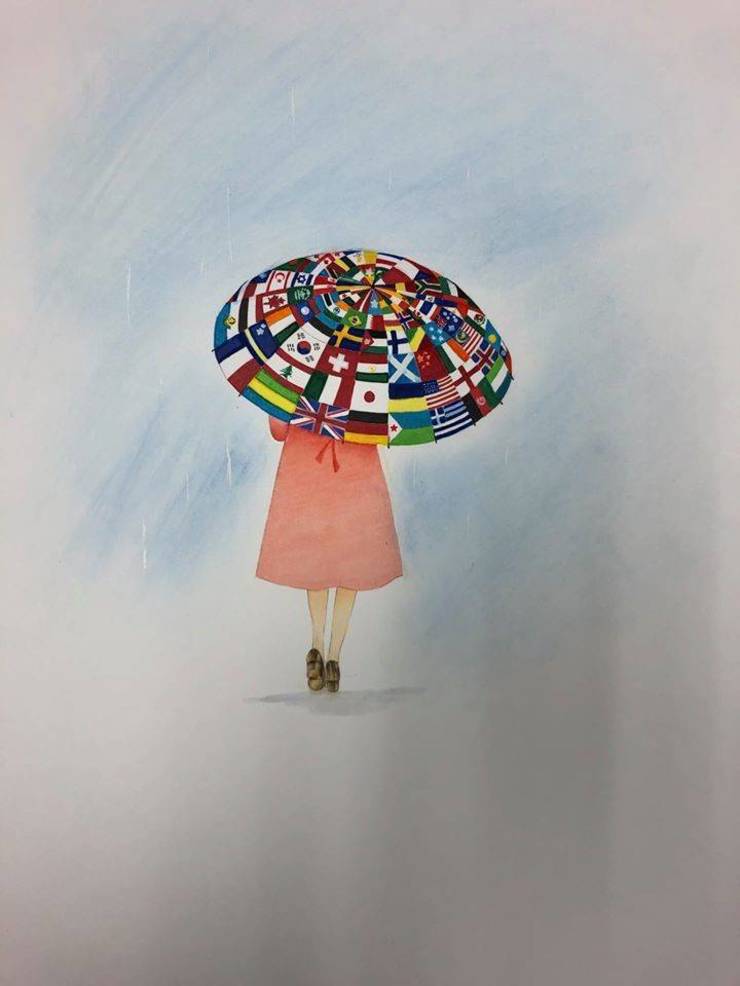 NEW BRUNSWICK, NJ – There’s the painting of a ragamuffin doll sewed together from a patchwork of flags, having his heart stitched on.

There’s the poem that begins with the words, “Up from the forests/Beaches bare/The people came a marching.”

There’s the essay that references the world “only held together by a few threads” because of a polarized political climate.

At a time when the United States finds itself separated by a political chasm, a showcase of artwork created by children from across the globe captures their dreams of a world steeped in unity and understanding.

About 15 pieces from Sister Cities International’s Young Artists and Authors Showcase are on display in the windows of the New Brunswick Performing Arts Center.

“Every year, Sister Cities International leverages the power that art has to transform societies and transcend cultural boundaries through young artists and authors showcase,” said Michael Tublin, director for New Brunswick Sister Cities Association. “The showcase has given youths worldwide the opportunity to express their vision of a more unified, peaceful world through original artwork and literature.”

Tublin said that many of the students, who created these pieces before the COVID-19 pandemic, draw inspiration from their experiences during their trips to their sister cities.

In fact, the grand prize-winning painting was created by Mitzuki Tomita of Fukui, Japan – one of New Brunswick’s sister cities.

New Brunswick has also become a sister city to Tsuruoka, Japan, Debrecen, Hungary, and Limerick, Ireland, because of the exchange of ideals and ideas only this program can bring, said Tublin.

“It’s more meaningful than ever,” he said. “Art really transcends boundaries and gives a voice for people to speak out and have an opinion and make you think about things and it’s tremendously important that these sort of works get showcased.”

If there’s a through line connecting the pieces, it’s hope.

In the essay, “Perspective,” the world teeters on ruin because of discord. By the end the one-page piece, the young author has – quite prophetically and in many cities, including New Brunswick, literally – decided that, “Together, we will march side by side into the future.”

Tublin said the plan is to keep the artwork on display until the end of July.

Privacy & Data Consent (GDPR - CCPA)
To provide the best experiences, we use technologies like cookies to store and/or access device information. Consenting to these technologies will allow us to process data such as browsing behavior or unique IDs on this site. Not consenting or withdrawing consent, may adversely affect certain features and functions.
Manage options Manage services Manage vendors Read more about these purposes
View preferences
{title} {title} {title}

Do you need assistance?

Send us a message with a single click. We will reply as soon as possible.